Data can be used to craft narratives around air pollution, and enhance public support for action on air quality. In addition, In this section, we will discuss a few examples.

The Nepal Waste Map, run by Clean up Nepal, is a comprehensive platform that encourages public participation and enhances collaboration between Government and private waste service providers to improve solid waste management in Nepal.

Through the map, users have the ability to map the waste challenges faced in their neighbourhood and to get actively involved in addressing them. People also have access to information about waste infrastructure in the city, where waste is collected from and by whom, and which households have joined a waste service. 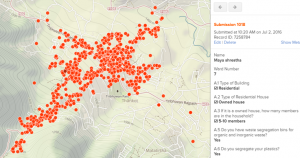 The waste map app provides citizens living in Nepal the ability to report waste dumping, waste burning and littering sites throughout the country, and also creates an opportunity for citizen engagement.

PAQI has partnered with AirVisual, a crowd-sourced air quality community that provides tools and information people need to thrive in polluted environments. The first air quality monitors are online in Karachi since October 2016. The data is publicly available on Twitter-  @LahoreSmog | @KarachiAir | @IslamabadAir

PAQI believes that that open access to data empowers the public to take necessary actions for a healthier environment for residents in Pakistan.

PAQI has moved forward the air quality narrative in Pakistan forward in the following ways:

” In the absence of official information, some Pakistanis have taken matters into their own hands. One is Mr. Omar, who installed air monitors in Lahore, Islamabad, Peshawar and Karachi, where he lives. He has set up Twitter accounts to post the readings in real time.”

Abid Omar’s video for the NepalAQ workshop in Kathmandu 2018

# Let’s check out this video of Abid Omar, the founder of PAQI talking about air pollution in Pakistan. Did you find the video engaging? Abid starts by talking about a pile of waste, something most attendees might have observed in their day-to-day life.

Launched in December 2017, the Air Pollution Knowledge Assessments (APnA) city program run by the team at UrbanEmissions.info is designed to provide a starting point for understanding air pollution in Indian cities. They opened reports on emissions and dispersion modeling results for 20 Indian cities, and continually adding other cities with the eventual goal of covering the 50 1-million plus cities in the census.

The modeling database behind the APnA city program is updated and carved from the organization’s operational all India air quality modeling system, which is in-use for long term policy assessments and short-term air quality forecasting. The main focus is on non-Delhi cities, putting together stories for cities with limited information, and taking the databases forward for public dialogue and policy discussions. All the data is publicly available for use by other groups.

The team is currently engaging with a few State Pollution Control Boards to explore work on specific measurement and mitigation efforts.

Through this program, the team at UrbanEmissions.info hopes to create a narrative on the problem of air pollution in cities where such data was previously non-existent. Their motto is: cleaning the air with data

“An informed problem is a problem half solved.”

Check out a video from Dr. Sarath Guttikunda presented during the workshop.

In Pennsylvania, USA, Citizen Sense worked with local residents to develop a pollution monitoring kit. 30 monitors and kits were prepared and distributed to local residents, and monitoring was conducted over a seven month period. Data collected during this time was used to create five data stories. Read more about the project here. They also used openair (remember the package we discussed in a previous module?) for data analysis!